The clients were a couple who lived in the house with their teenaged grandson, and they were in dire need of a kitchen remodel.

HOW CAN WE HELP
LET'S VIRTUALLY MEET
TESTIMONIALS

The original kitchen was outdated and cramped. Since there is no basement in the house, their storage was really tight. Most of their stuff, their small appliances, and so on, were piled onto rolling carts and stuffed into various cabinets and hutches. Everything was purchased at different stores at different times. Nothing matched or made sense. Everything was about making do.

At one point, they had pulled up the living room carpet because they knew they needed a new floor in the kitchen. Since the clients pulled it up themselves, they had been living with this painted wood floor for a long time. Certainly not ideal.

Over the years, they had made a few changes, but nothing major really since the 1960s. They had replaced the original stove a couple of times, changed out the hood and the range, then changed it again. Besides that, it was pretty much as it was when they moved into the house decades ago.

The fridge, the range, and the microwave were all purchased before we came in, in anticipation of the kitchen remodel. As a result, we had to work around those dimensions.

The layout of the kitchen itself didn’t change much at all. This was mostly because of the shape of the room and the placement of the doorways and the window. We were limited in that way because there was a finite space that everything had to fit in, and it had to be designed in such a way that it made sense.

Because of the way the doors and various accesses are – to the garage, the basement, and so on – the kitchen had to stay at one end. We did move the range over to this wall, however, and that gave them room for a dishwasher, which was a nice feature for them, and something they didn’t have before.

The cabinets are a natural cherry with a cappuccino stain. We stained the floor in a contrasting color and extended it into the living room where they had removed the carpet.

We took the cabinets to the ceiling and put in cam lights because before, it was quite dark. Initially, there was no light fixture at all over the kitchen work areas other than this harsh, annoying fluorescent light fixture over the sink that shone right in your face.

The kitchen was very poorly designed. We did have to get a little crafty with storage because of how close the range was to the window. We had to end it because the window starts right there. The real challenge was to get the range far enough away from the corner so that we could actually have some storage there.

We put in some nice little pantry pullout cabinets, spice pullouts, and so on – basically, all kinds of tucked-in spaces to put their stuff away and out of sight. We put in a pullout for the trash can, and some pullout shelving to create more useful space in the corner cabinet.

So that the range wouldn’t be so close to the corner, we put these skinny cabinets in, which allowed us to push it as close as possible to the window without it feeling like it was too close. As a result, it has a nice separation, all because of these little three-inch cabinets, which are very useful for a lot of things.

We installed under-cabinet lighting for task-related work – very subtle, LED light strips – but they create a soft, elegant glow that not only looks great but is also quite practical.

We extended the backsplash throughout the kitchen and joined the space at the top of the cabinets with crown molding. 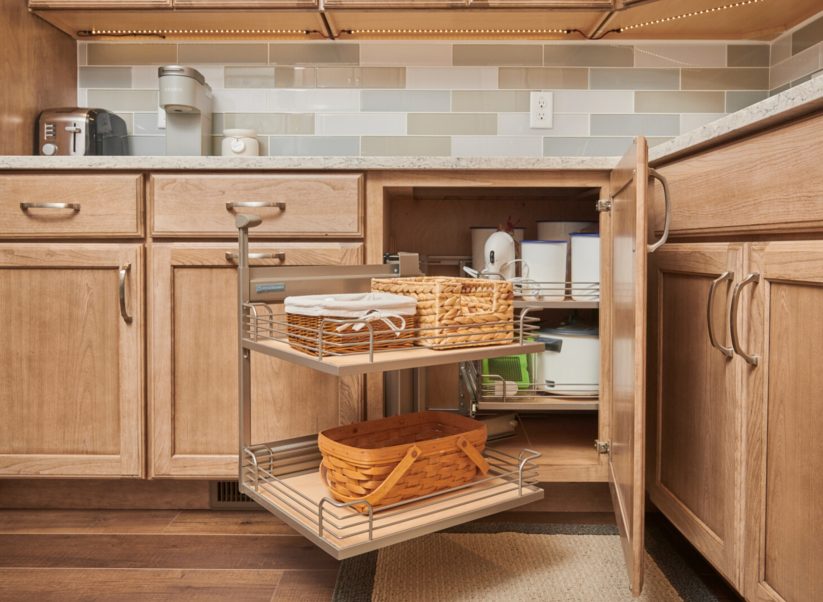 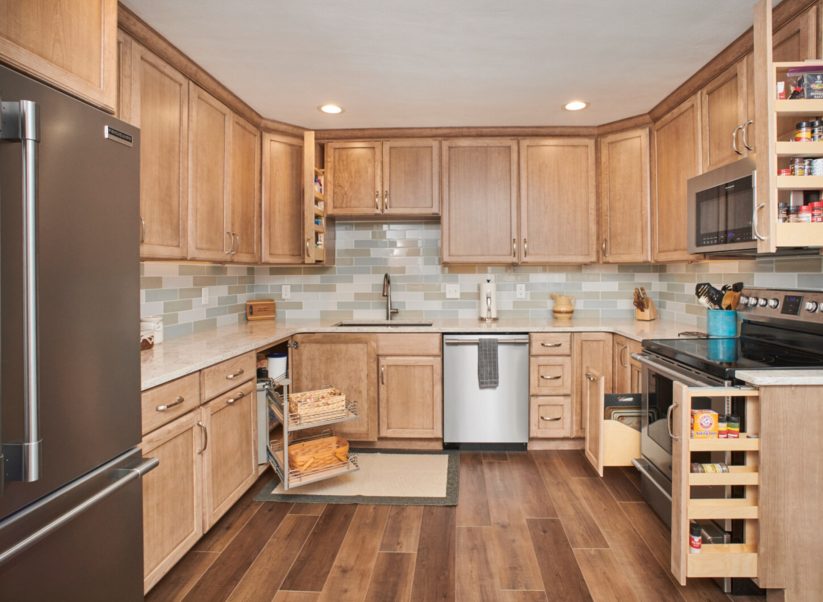 The result is a beautiful, functional space that delivers all of the features the clients wanted and dramatically improves their quality of life. They are no longer piling things on top of things, they’ve got plenty of storage for all of their stuff, and the room looks clean, bright, modern, and contemporary without feeling stark, sterile or cold.

We are very pleased with the result, as are our clients, who now no longer have to look or work in at an outdated, dysfunctional, poorly designed kitchen.

With our referral program, you’ll receive 4 hours of handyman services for any client you refer that moves ahead with a project worth $5,000 or more.
Refer a Friend